an issue of All New Atom by DC Comics 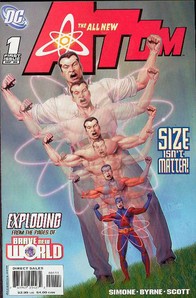 Strange things have been happening in Ivy Town since Ray Palmer disappeared. In fact, it appears that the the whole town's been experimented on for decades. Enter Ryan Choi — the young hotshot professor who’s filling the empty slot on Ivy University's teaching staff… and who inadvertently ends up filling the old Atom's super-heroic shoes!

Can Choi make a difference in a town more creepy and mysterious than anyone ever realized? And can he live up to the towering legend of his predecessor?