Broken Moon: Legends of the Deep #3

an issue of Broken Moon: Legends of the Deep by American Gothic Press 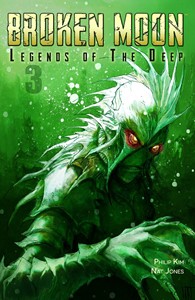 NM Price:
$3.99
Release Date:
2/15/2017
Issue not yet rated - You rated this a 0
Previous Issue Next Issue
Issue description
Writer: Philip Kim
Artist: Nat Jones
Korbin and his entourage of gill men have been saved from a Kraken attack by none other than Avery, David, and Keeney the Franken-werewolf! But how do Avery and Keeney know the same melody that always calms Keeney down from a rage? Old loyalties are unearthed and underwater nuclear meltdown looms!