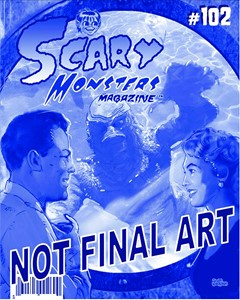 NM Price:
$9.95
Release Date:
10/12/2016
Issue not yet rated - You rated this a 0
Previous Issue Next Issue
Issue description
From the Revenge of the Creature, Tarantula, the Mole People, and Daughter of Dr. Jekyll, to Attack of the Puppet People, the Brain from Planet Arous, and Invisible Invaders, Scary Monsters Magazine puts the scary spotlight on John Agar, the king of the B movie science fiction horror films of the 1950s. In addition to Monster Kid favorites like Kaiju Korner, Mazza's Scary Stills, Dr. Gangrene's Mad Interview, and Tiny Tales of Terror, Scary Monsters will also feature Al Adamson's much-hyped yet disappointing 1971 clunker Dracula vs. Frankenstein, an interview with femme fatale movie and TV actress Francine York, and a revisit with cosmic comic superhero ROM: Spaceknight.