an issue of Solarman by Scout Comics 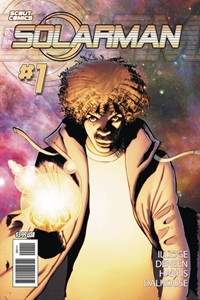 NM Price:
$3.99
Release Date:
7/6/2016
Issue not yet rated - You rated this a 0
Previous Issue Next Issue
Issue description
Writer: Joseph Illidge
Artist: N. Steven Harris
Originally published by Marvel Comics and written by Stan Lee, Solarman returns after a twenty-five year hiatus! Ben Tucker is a teenage hacker going after the wealthy and corrupt, fighting bullies, and living in his father's basement. When a mysterious alien attacks a space station conducting secret experiments, Ben is accidentally exposed to extraterrestrial technology and imbued with nuclear-based power. Now Ben Tucker is a fugitive from the police, an alien menace, and a paramilitary division hunting him down, with the intention to capture...or kill.