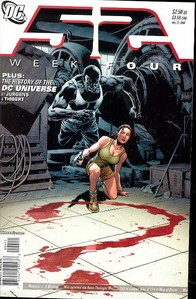 NM Price:
$2.50
Release Date:
5/31/2006
4 ratings - You rated this a 0
Previous Issue Next Issue
Issue description
Writer: Joe Bennett Keith Giffen Geoff Johns Grant Morrison Greg Rucka Mark Waid
After the INFINITE CRISIS and before One Year Later, the DCU spent a year without Superman, Batman and Wonder Woman. A year in which those heroes were needed more than ever as the fate of the world hung in the balance. Who stood up in their absence? And who sat out?