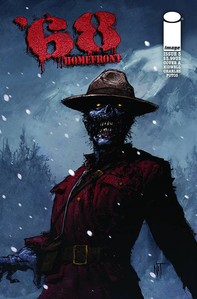 Issue not yet rated - You rated this a 0
Previous Issue Next Issue
View all 2 covers
Issue description
Writer: Mark Kidwell
Artist: Kyle Charles Jay Fotos
The winter snows run red and the northern lights shine on the dead as '68: HOMEFRONT travels to Black Falls, Canada for the opening chapter of the all-new two-issue story arc 'DODGERS.' Doug and Bobby Hacker, twin teenagers running from the draft, running from the specter of death in Vietnam, find more than they bargained for as slavering sled dogs, rotting Mounties, and a vicious, desperate mountain man bring the undead contagion to the frozen north.