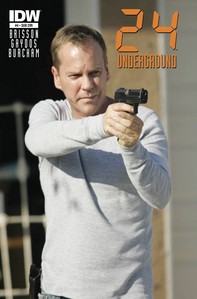 NM Price:
$3.99
Release Date:
7/16/2014
Issue not yet rated - You rated this a 0
Previous Issue Next Issue
View all 2 covers
Issue description
Writer: Ed Brisson
Artist: Michael Gaydos
Now that you've seen Jack Bauer's return to television in LIVE ANOTHER DAY, read the story that sent the heroic agent spiraling into his darkest days as an international fugitive. In Odessa, Ukraine, Jack has found himself stuck between the CIA and a Russian mobster from his past. How will he get out of this one?